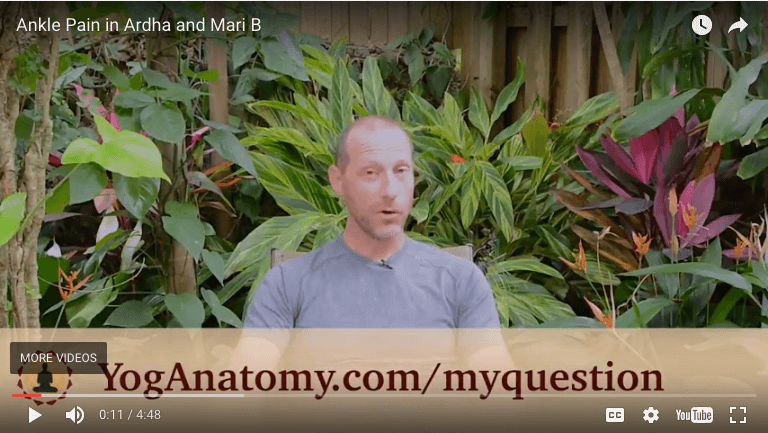 Transcript below of: Ankle pain in half lotus: How to evolve half lotus pose without pain

Alright everybody, I’m going to do another question of the month for you. This month’s topic is ankle pain in half lotus posture. Before I get started, if you haven’t been there in awhile, go to yoganatomy.com and check out the latest online workshops and courses I’ve got going on on the website. There’s some very good stuff there. If nothing else, go ahead and sign up for the newsletter and get the latest articles in your inbox.

This month’s question comes from Daphne. “Hi David. I’m a yoga teacher and I have a student who gets a lot of pain on the top external part of her ankle in ardha baddha padma paschimottanasana and marichyasana B as soon as she folds over. That pain can persist for a few days if she tries to point the foot. If she sits in ardha padmasana, she does not experience that kind of pain. Would you have any advice to give me and her? Many thanks in advance.”

Good question Daphne. The question about ankle pain in half lotus is not an uncommon question either. I think there are kind of two ways to look at this or two approaches to go after. One is the technique itself.

First and foremost is, make sure the foot is in the right spot. There are loads of articles on yoganatomy.com already about where I believe the foot should line up. Of course it changes slightly depending on the person. By that I mean proportionally. If they have a longer femur, shorter tibia, or longer tibia, shorter femur, it might change the placement of it. Generally what you’re looking for is the outer edge of the foot to sit right in the hip crease. Students have a tendency to push the foot further across. Because there’s some stuff going on on the outside of the foot, it’s also possible that this person is already doing that to avoid that kind of pain, which is also understandable. The problem is that sometimes that can increase the amount of pressure. It’s hard to say without seeing it and without knowing what’s going on there. It’s one thing to look at. Look at the foot position. Make sure the foot is going into the right spot for that person. Maybe try adjusting that a little bit. That could be your first sort of basic test to try to figure out if foot position is the issue. Maybe you change the foot position, have them go forward a little bit, and see if they still have the same problem.

The other part to address with ankle pain in half lotus, is historically, is there a problem in the ankle. Have there been previous injuries there, or just you know, multiple sprained ankles? There is a tendency for ankles, once they get sprained, if you over stretch those ligaments, there’s a destabilization that happens and you’re more likely to keep rolling over that ankle and spraining it. If that happens, it’s destabilized and just that by itself can create pain when putting the foot into certain positions and then taking it out. It could be as simple as that. If it’s mild, the strains are not so many, you know, less strains, it’s possible that there’s a buildup of scar tissue and doing postures like this are putting pressure on that tissue. That could get irritated or inflamed a little bit. Long-term, that’s probably okay, but maybe short-term, you need to reduce the amount of pressure going on it.

Try taking it from both of those angles to work with the ankle pain in half lotus. Look at the technique. Look where the foot is being positioned. Secondly, see where you can kind of move towards, without eliciting that response. Make sure you get a good history and do an assessment with them to make sure there’s no major injury that was there that they still haven’t told you about, which is possible.

Alright, I hope that helped maybe give you a way to think about it. 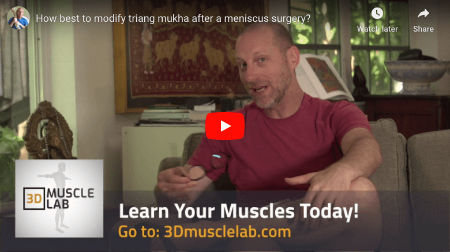