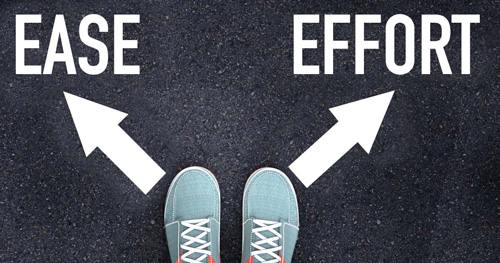 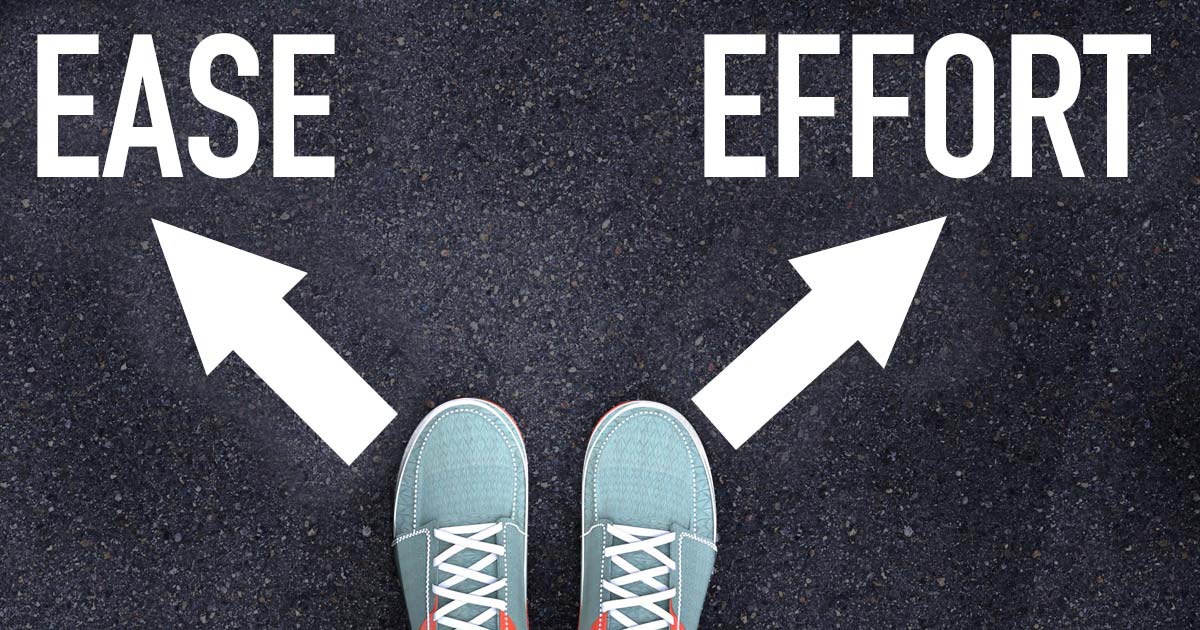 Find a balance between effort and ease in yoga

Patanjali’s Yoga Sutra describes Yoga as having a balance between steadiness and ease. Chapter 2:46 says: Sthira sukham asanam, which I interpret to mean that yoga asana has the qualities of both steadiness and ease. If there’s too much of either, too much effort or too much ease, then it’s something else. It’s not Yoga.

Too much effort in yoga

I have the perspective that, ultimately, yoga is about the nervous system. If our nervous system is in full “Go” mode all the time, we get tired, burnt out, and over-tax our immune system and other systems in the body. One of the ways that I understand yoga is as a tool to help restore balance to our nervous system. If we are always pushing in our yoga practice, practicing to 100% every day, then it’s likely we’re just bringing in our habits of over-doing from daily life, rather than taking the opportunity on the mat to slow down and perhaps pay closer attention. That closer attention might start by slowing down enough to pay attention to the moment by moment sensations that we experience in our body.

Additionally, the slower route with careful attention is usually, paradoxically, the faster way to achieving aspects of the postures. Over-doing postures, whether that’s over-stretching in an effort to get more flexible faster, or doing too many postures or transitions in an effort to get stronger faster, frequently leads to fatigue, overworked muscles, and often injury. All of those conditions mean that now we have to wait even longer and go even slower in practice while we wait for muscles to recover or injuries to heal. Slow and steady is the faster way forward, if we have the idea that we’re going somewhere with the postures anyway.

Too much ease in yoga

One sign that there’s not enough effort in yoga practice? You’re not experiencing any change. That doesn’t mean that you should expect that there will be dynamic change happening all the time. If you practice yoga for many years, it’s normal to go through periods of time where you experience a lot of change and periods of time where you are working in a steady way at a plateau. If you have been at a plateau for a while, it may be that your body/mind simply needs that time to integrate the changes that have occurred in your practice.

But, if you really seem to have stalled in your practice, then it might be time to dial up the intensity a bit. That doesn’t necessarily mean doing more postures or even doing longer practices. It might mean upping your game with respect to consistency of practice. Maybe that’s doing shorter practices, but more often. It also might mean dialing in your attention to breathing and concentration during your practice. If you’ve been feeling stalled in a particular posture or group of postures, it might mean that some technique is missing. That’s a good time to check in with your teacher and get some guidance and direction for your practice. If you usually practice at home, then signing up for a workshop or retreat can be a good way to re-energize your practice.

Identify a balance between effort and ease in yoga

So, how do we identify the balance between effort and ease, and practice intelligently? One of my favorite ways to describe maintaining that balance is this: use as much effort as necessary, but as little as possible. Both Patanjali’s Yoga Sutra and Hatha Yoga Pradipika suggest that, in one sense at least, yoga is about conserving energy. What are bandhas for, if not for conserving, cultivating, and directing prana/energy?! So, if you’re looking for that fine line between effort and “over-efforting”, ask yourself this: Can I do this posture with less effort? Am I activating things that don’t need to be active? Check your neck, upper trapezius, and facial muscles especially. These are common areas of tension that rarely need to be activated to do the actual yoga posture.

What are some cues that you’re working in that zone of balance between effort and ease?

If you’re frequently out of breath during practice or you feel like you’ve just run a marathon when you finish practice, you’re working too hard! Take another look at your breathing. Slow it down and consciously relax the breath. Maybe consider doing fewer postures until you have the breath more dialed in. If you feel like you’re drifting off mentally or especially sleepy during your yoga practice, then it might be a good idea to pick up the pace of the breathing slightly and see if you feel a bit more energized.

If you’re wiped out after every practice, you’re doing too much. If even the idea of starting your yoga practice feels overwhelming, then I’d suggest you’re setting yourself up to do more than is necessary. Start smaller, but be consistent.

Some sore muscles are certainly a part of doing any new kind of movement or activity, but frequent strains and tweaked muscles showing up in your yoga practice are a caution flag that you might be doing too much. Again that could also be an alert from your body about how you are doing certain postures. That’s a good time to check in with your teacher to see if you need to make some changes to how you’re doing some postures so that you are doing the most appropriate version for your body at this time in your practice life.

Why is maintaining a balance of effort and ease important?

Working in that zone of balance is one key to finding the will to continue and maintain your practice. If you always practice to 100%, you’ll likely burn out and quit. But if you practice in a way that feels sustainable, you’re more likely to continue. While there are many different types of benefits that you might experience from doing a yoga practice, you’ll only experience those benefits if you actually keep doing your practice. Staying within that zone of balance between effort and ease definitely increases the likelihood that you’ll stick with the practice and experience all the benefits that yoga has to offer.

Staying in that zone of balance between effort and ease also makes the practice more effective if we’re looking at it as a practice for the nervous system. As I’ve said, if there is too little effort, we won’t create any change. But, too much effort can push our nervous system into the sympathetic “Go” mode, creating too much input too fast for the nervous system to really process and integrate. In that mode it’s also easy to go too far into a posture or just do too much practice on any one day, because we’re not really listening to our body or fully aware of the moment by moment sensations in that state. We’re also not going slow enough in that heightened sympathetic state to “catch” those alerts from our body that something needs to change in enough time to actually change it before we’ve gone too far.