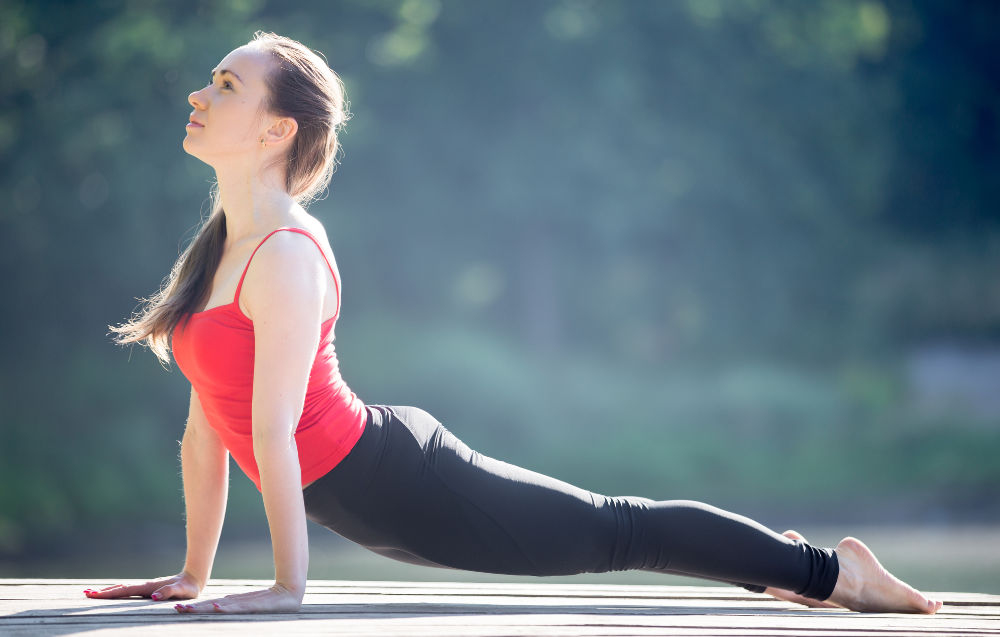 In this article we’ll take a look at another cue commonly used for upward dog. As with any alignment suggestion or verbal cue in yoga, it’s important to step back and consider what our overall intention is for the posture and whether the cue that we’re using is the best way to direct movement towards that intention. It’s also important to observe the results of adjustments, whether verbal cues or physical assists, and objectively evaluate whether that adjustment took the student in the intended direction.

Sometimes what catches our attention in the student’s body is a reflection of tension or misalignment somewhere else in the body. In that case, the best cue for helping the student move toward the overall intention for the pose might actually be to make an adjustment in some other part of the body. In this article, we’ll take a look at a common verbal cue to point the elbow crease forward in upward dog. I’m going to suggest that what we see that often triggers the use of that cue is really a reflection of something else going on in the pose.

Where does this cue come from?

This cue to point the elbow crease forward in upward dog likely comes from real observations that something appears constricted or jammed up in some way in a student’s upward dog. Often this cue is intended to fix problems in the shoulder girdle or encourage external rotation of the shoulders. The cue to squeeze the shoulders back and down is frequently used along with this cue with the idea that it will get the shoulders out of the ears. This is also a cue that I’m not a fan of, as I see students get more of the space in the upper spine that I believe they’re looking for with that cue, when they use the action of pressing the hands to move the rib cage up between the shoulder blades as I explain in this post: Should We Squeeze The Shoulderblades Together In Upward Dog?

Another reason that this cue might be used is when we observe something specific in the elbows themselves. Perhaps the elbows are pointing farther out to the sides than we’d like or we might observe that the elbows are rotated farther in toward the midline of the body than we’d like. Either way, we’ve observed something in the elbow joints that gives us the idea that something about the upward dog should change. If we don’t look any further than that, then our first instinct might be to give a verbal cue to change the position of the elbows.

But, what’s important to remember is that the position of the elbows is a reflection of the shoulders above and the wrists below. If we look closer at this hypothetical student with elbows either too far in or too far out for our preference, we would also likely see other patterns in their shoulders, hands and wrists, lower back, and even the distance between the hands and feet, that will tell us more about why the elbows are pointing wherever it is they’re pointing.

There is also a certain amount of variability from body to body. Where the elbow joints are pointing in upward dog is related to the angle at which the humerus fits into the socket to make the shoulder joint, as well as the angle at which the ulna (one of the two forearm bones) connects with the humerus to make the elbow joint. Depending on your structure, your elbows may point in different directions when they are neutral for you.

For instance, hypermobile practitioners have a tendency to be weaker in the shoulder girdle when they start. They also tend to have elbows that easily hyperextend. When you mix these two elements together in upward dog, you often do see the elbow crease pointing forward while also being hyperextended. This happens both because of the bony relationship at the elbow, and because of the lack of strength in the shoulder joint. This combination of hyperextension and lack of strength allows the elbows to externally rotate and point forward. Of course, just because the elbows are pointing forward doesn’t mean there is integrity in the posture.

Because the elbow is in the middle of a chain of joints, the direction that the elbow is pointing in upward dog is also related to how we place our hands on the mat and whether we turn them a little in or a little out in order to align the wrists. Changing the way in which your elbow is pointing impacts both the shoulder above and the wrist below. That’s because the elbow direction comes not only from the shoulder, but also from the rotation that happens in your forearm. Go ahead, put your hand on the floor and rotate it, then watch what happens in the shoulder and forearm.

As I’ve discussed in other articles I tend to place more of the attention in upward dog on finding the right amount of distance between hands and feet, which then allows the shoulders to remain in a more neutral position, rather than letting them creep too far forward. As I’ve also explained in other articles, I’m more interested in how the crease of the wrists line up with the front of the mat in upward dog, than in the direction that the elbow joints are facing. I prefer to see the wrists horizontal to the front edge of the mat so that they are hinging forward and backward with even pressure across the wrist, especially since the wrist is more vulnerable than the elbow above it.

When to change the elbow position in upward dog

That said, if you are feeling pain or discomfort in one or both of the elbows, your shoulders, or your wrists, then it may be worth taking a look at where the elbow is specifically, and especially where it is in relationship to both the shoulder and the wrist. It may indicate that a change is required in the shoulder girdle, the shoulder joint itself, the elbow, or even the hand/wrist.

Certainly, if you have pain in your elbow while doing upward dog, then an adjustment may be necessary. As I said, the main joint that makes up the elbow, the humeroulnar joint, is a hinge joint. So, if the arm is positioned in such a way that force is going more into one side of the hinge than the other, or if the arm is positioned in a way that the elbow can’t really bend easily at the joint, then something about your upward dog probably needs to change.

Elbows facing in the wrong direction for your body in an upward dog is more likely to affect the wrist. I recently had a consultation with a student who was complaining about pain in the outside of her wrist. When I saw her do her upward dog, I noticed that she was obviously trying to rotate her arms so that her elbows were facing forward. When I asked her to try an upward dog with her elbows slightly bent and the crease pointed inward more, the pain left the outer part of her wrist.

Does aligning the elbows help us address our intention?

This is one of those cues that I’m not really a fan of, because, although I can understand some of the possible underlying intentions behind why someone might use it, I don’t think the cue is actually taking us in the direction of that intention. I also think, by using this cue, we have the potential to compromise the wrists and the shoulders by prioritizing the elbows, which are more likely expressing what is happening at the shoulders.

I prefer to look at upward dog more holistically. If we have the idea that our intention is an even length along the front of the body, then I’m going to look at the distance between the two bases of support in this pose first, the distance between the hands and the feet. Then I want to see that the student can find support for this shape in the body that they have. Much of that support is going to come from the shoulder girdle and then follow out through the hands. So, I’d want to see the shoulders and hands/wrists in a healthy position that supports the pose. Since the elbows are between those joints, I’d let them do whatever it is they need to do to allow the supporting joints to have their role.

If I’m observing a student’s upward dog, the elbow joints might still catch my attention. But, if something looks off to me in the elbow joints, I understand that as a reflection of tension or misalignment somewhere else in the body. I’m going to look first at the overall shape of the upward dog and then at the shoulders and wrists to get the best sense of how upward dog is working for a student.