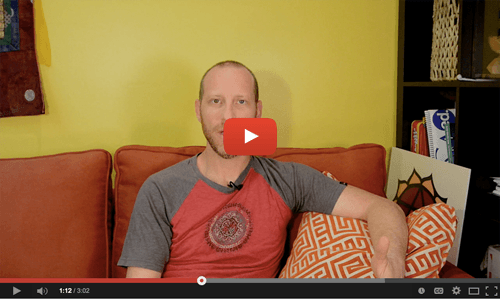 Why The Emphasis On Forward Bending?

Transcript below of: Why is there so much emphasis on forward bending in modern yoga?

The question is, it’s actually two questions, “Why all the emphasis on hamstring stretching in most yoga classes with so little quadriceps stretching?” And then the second question, actually that one is two by itself. The next question is, “Aren’t most desk-working Western folks at least as prone to tight hip flexors as to tight calves, not to mention those of us who commute by bike?”

Certainly, if you spend lots of hours sitting at a desk, working on a computer and you’re not getting opening in the practice that you do for the front of your body, you should add that on. If not in class, because it’s a style or tradition kind of thing, then add it on outside of practice. Spend 15, 20 minutes working to stretch out your calves and your quadriceps extra, especially if you commute by bike.

Let’s go back to the first question, why all the emphasis on the hamstring stretching. Unless both of your legs are together and you’re doing forward bends, you shouldn’t really be emphasizing the hamstring stretch. The question isn’t so specific, whether it’s talking about standing postures or seated postures. Anytime you separate right side and left side and you’re doing yoga postures, really the focus is on the hips.

Hamstrings are usually the tightest. It’s just how we’re built because we walk and run and do other activities that end up tightening the hamstrings. We often feel it in the hamstrings. That’s different than the posture itself being focused on that. What happens a lot of times is that after the hamstrings open, all of a sudden you feel the posture in new places or different places in and around the hip joint.

I want to make one more point on this. Also when we’re doing right side, left side postures, for instance seated postures, even if it’s a seated forward bend but you’re doing a right side or left side posture, let’s say seated half lotus forward bend — once you do the half lotus part, yes, you fold forward but the emphasis shouldn’t be on the hamstrings at that point or even on the forward folding.

You should forward fold but that should be secondary to the work that’s going on in the side that has done the half lotus.

This is a general thing I say in lots of workshops. If you’re changing the shape of a leg, that’s probably the one that should be emphasized. Anytime we do the one-sided postures, put the leg into half lotus, that’s where the focus and learning should be. The forward fold is secondary to that. That way you won’t be over-emphasizing just the forward bending.

Alright, I hope that helped. Maybe I gave you a new way of thinking about this hopefully. Alright, once again, if you haven’t submitted your own question go ahead to yoganatomy.com/myquestion. See you next month.