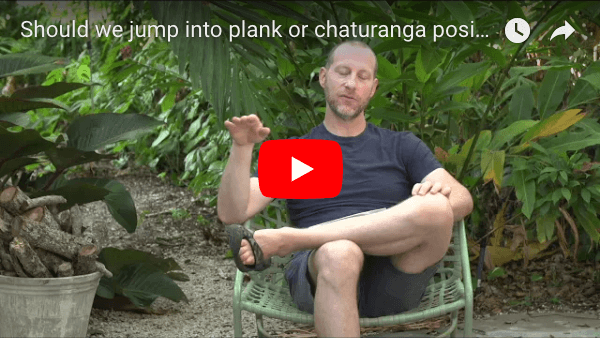 Should We Jump Into Plank Or Chaturanga Position?

Transcript Of: What’s the Difference Between a Jump Into Plank or Chaturanga?

Hey everyone! Welcome to this month’s question of the month. Of course, you remember you can always submit your own question by going to yoganatomy.com/myquestion. This month’s question comes from Stephanie. She asks about whether it’s better to jump into plank or chaturanga position. You should definitely read: Should You Land in Chaturanga or Plank?

“I am a long time Ashtanga practitioner and a teacher. I have been taught conflicting things when it comes to jump backs. Ashtanga teachers are usually fine with jumping to plank then lowering to chaturanga, but in my vinyasa training we had it drilled into us that jumping to plank was “terrible on the shoulders.” Personally, I don’t see why. [David: I’m with you.] It seems that the same muscles need to be engaged for both jumping into plank and chaturanga and if not done properly both wouldn’t be safe for the shoulders. Anatomically, is it just as safe to jump to plank as it is to jump to chaturanga? Have you written any articles about this? Also, will you be doing any workshops in California?” [David: I don’t have any plans for California.]

My basic answer is this: jumping to plank or jumping to chaturanga could both be potentially bad for your shoulders. What is important is not whether you jump into plank or chaturanga, it’s the technique that you use to do either of those two things, like it is for any posture. To make it all about a posture or doing it a particular way is wrong because there are a variety of bodies. You know, you allude to this already, you know anatomically, it’s the same muscles. It’s similar muscles at the very least, some the same and some different.

Personally, and actually before I go there, on the website there’s a series of articles on the sun salutations and one of those covers this very subject in writing so you can always go and refer to that, so that’s in sun salutations. It’s probably the third or fourth article in that series (Sun Salutations Part 6 – Lowering Into Chaturanga). I didn’t look it up before I did this, so I apologize.

But, either way, personally, I prefer to teach jumping to plank first and the reason that I do that is because I’m trying to create a pattern of stability in the shoulders that can then be used if somebody wants to move on — and I would consider jumping to chaturanga more advanced. In a sense because you kind of bypass the shoulders and you have to catch yourself in a lower position, so as a result of that, you want the anatomical patterns in place, so that when you advance on, in my case that’s how I see it, advance on to jumping into chaturanga, you have the strength. Now, by strength, I mean strength and stability so that you don’t injure yourself by doing that. And then for me, and if you haven’t, you know, read my book, Functional Anatomy of Yoga, the whole section on going upside down and shoulders and all of that in the second half of the book, which is basically arm balance stuff, is all built on top of the very pattern that you use for the looking up and the jumping into high plank part.

Every arm balance and handstand, all of that stuff is really built on that foundation, so I stress it. I always teach jumping to plank first. I don’t find it to be injurious to people’s shoulders. I haven’t seen it, not in the Ashtanga community. But, it could be for the random person who does one class a week and the way they do it. If they let their shoulders move back too far, there are all kinds of why it could be bad, more than I care to say just in this video. But, I don’t see it that way. I think either can be done really well or either can be done poorly. So, that’s my take on it.

If anybody else has a question – or feel free to drop comments in the bottom of this if you disagree, I’m ok with that – go to yoganatomy.com/myquestion.