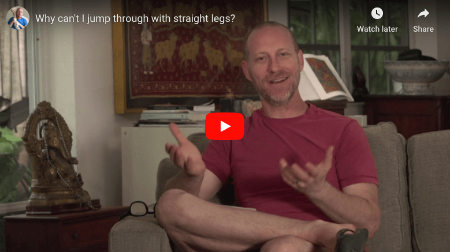 Why Can’t I Jump Through With Straight Legs?

Transcript: Why can’t I jump through with straight legs?

Hey everybody! Welcome to this month’s question of the month. Of course, if you’ve got a question that you’d like me to answer, just go to yoganatomy.com/myquestion and I’ll do my best to get it on video for you. This month’s question comes from Yuval and it’s about how to jump through with straight legs.

“Dear David,
Thanks so much for all the great info. For many months I’ve been struggling to jump through with straight legs from adho mukha to dandasana. I’m able to float pretty good in surya namaskar and jump through with crossed legs (to dandasana), but for the life of me, something always gets stuck as I float forward and reach the line of my palms. [DK: I guess with straight legs?] It seems to me as if my hands are too short to support this transition. Is that possible? Obviously I know that this transition is not the indication for a “good practice”, but I must admit I’m curious about what the bleep is going wrong, anatomically.
Thanks again and be well!”

Okay, Yuval. Good question. It’s one that I’ve been asked before, not necessarily in a question of the month, but in workshops. I have to admit I’ve never been able to jump through with straight legs, so I feel your pain. I tried for a while just like you. It is no indication of a good practice, so I let it go.

I think you’re on to something with, not short hands, but short arms, which is another way of saying long legs, right, because it’s all relative. So, certainly proportions matter. And, there’s one other proportion that you need to keep in mind there. It’s not just long legs and short arms, but do you also have a long or short torso. If we look at it from the ideal, from a proportional point of view, the people who would have the easiest time jumping through with straight legs would be people with long arms, relatively speaking, short torsos, and short legs. If you have long legs, long torso, and short arms, you’re going to have the hardest time doing the same thing. So, if you think it’s your arms, there’s a good chance it is if you’re strong. And, you seem to be saying you’re strong. You can float, you can jump back easily, so it’s not strength.

There’s only one other factor, which is hamstring tension. If the hamstrings are tight, that is another possible restrictor to your ability to jump through with straight legs. If you want to test and try to get a feel for what it might be, you can lengthen your arms. Not surgically, don’t go cutting your arms off and then putting them back on with an extra few inches, but just put a block under your hands. Can you jump through with straight legs if you stack a block underneath your hands? If you can, then it might just be proportions. If you still can’t do it, then there’s a better chance that maybe there’s still some tension left in your hamstrings that’s preventing that from happening.

Test it out. Maybe that will give you a few things to think about. You can always email me and I’ll see if I can help you a little further if you need it.

Alright everybody! If you’ve got a question that you want to submit, go to yoganatomy.com/myquestion.