Should You Land In Chaturanga Or Plank?

Myth #11: You should never land in plank pose from a vinyasa 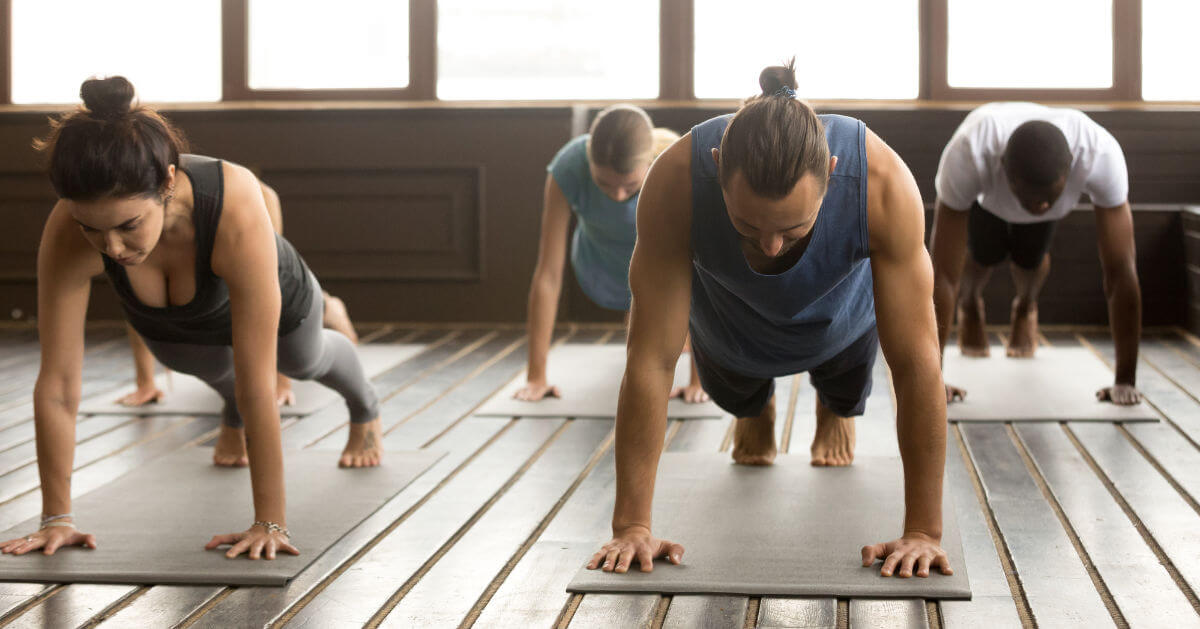 I very briefly answered this question, should you land in chaturanga or plank, when responding to a question of the month a while back. In this post I’ll continue my series of yoga myths and misconceptions. I’ll expand on the anatomy of landing in chaturanga or plank. In this article, I’ll explain more fully why both poses require some caution and consistency of practice to do safely.

Where does this cue come from?

Generally this cue seems to come from concerns related to an idea that landing in plank is jarring on your shoulders or dangerous in some way for the wrist or low back. I’ll expand on this more below as we get into the anatomy of chaturanga and plank. But the truth is either plank or chaturanga could be potentially injurious. That is, they both require caution. They could be injurious if you haven’t built strength in the right places to hold the pose, or if you do more repetitions than you have built the strength for. Neither of these poses is always a safe option if your body isn’t prepared for the pose.

Have you read my post, The Shoulder Joint In Chaturanga: Who Are You Going To Blame? Then, you already know that I think a key part of a healthy chaturanga is stabilizing the scapulae to the ribcage so that the shoulder joint can move in a balanced way without straining smaller muscles like the rotator cuff muscles. The shape that we’re making in plank pose is very similar in many ways to chaturanga. And I think the same idea holds true. Stabilizing the scapulae to the ribcage is key. Several muscles contribute to this stabilization including: trapezius, rhomboids, pectoralis minor, and most importantly, serratus anterior.

Newer practitioners and/or those who don’t do a yoga practice regularly (especially a vinyasa-style practice) should first avoid doing too many vinyasas, period — never mind whether they land in chaturanga or plank. But, as newer practitioners are still building strength to control and support the shoulder girdle, I suggest that they consider landing in plank, at least some of the time. The reason is that holding plank pose does more to connect the practitioner to activating the serratus anterior than holding chaturanga. Doing more chaturangas is actually not the best way to acquire the strength to hold chaturanga. Once the strength is there, then you can choose to land in either pose.

If you have very strong triceps, possibly from other sports, you could even “avoid” really connecting to the important serratus anterior muscles. Instead, you could rely on the triceps to hold you in chaturanga. If that’s true you’re missing an opportunity to work on connecting to a very important stabilizing muscle that is necessary in so many places in the practice, not just chaturanga.

In the shoulder girdle, you have to think from the center out. In other words, how do I stabilize the scapulae first? From that stability, how do I use the shoulder joint itself (where scapula meets humerus) in its most functional way? From there you continue down the chain through the elbow and wrist. If however, you never establish the stability of the shoulder girdle at a time when you are putting weight into it, then the functionality eventually falls apart. In other words, you increase the chance of injury.

Is landing in plank pose bad for the shoulders?

But what about that idea out there that landing in plank is somehow “jarring” or “bad” for the shoulder joint? I haven’t seen this actually be the case for practitioners. I’m not saying it couldn’t be anyone’s experience. But it hasn’t been the experience for the many students I’ve worked with as I’ve traveled all over the world for the past 20 years.

Most people actually have more control of their shoulder girdle in plank than when trying to land directly in chaturanga. After all, from a standing forward bend to a high plank there is not a huge amount of angle change at the shoulder joint itself. The real issue is which muscles you are using to stabilize it. And that, comes back to the scapula and serratus anterior.

Why and when you choose to land in chaturanga or plank just depends. Either could be the right choice. Experienced practitioners with a regular practice and no shoulder injuries can choose to land in either pose. Neither pose is probably going to be harmful if you have developed strength and control in the right places. If you haven’t taken the time to develop the strength and control in the right places, then landing in either pose could be harmful. Bottom line, take the time to build a vinyasa-style practice slowly. Focus on developing a connection to the serratus anterior muscles for long-term stability of the shoulder in chaturanga and plank pose.