How Should You Line Up The Feet In Downward Dog? 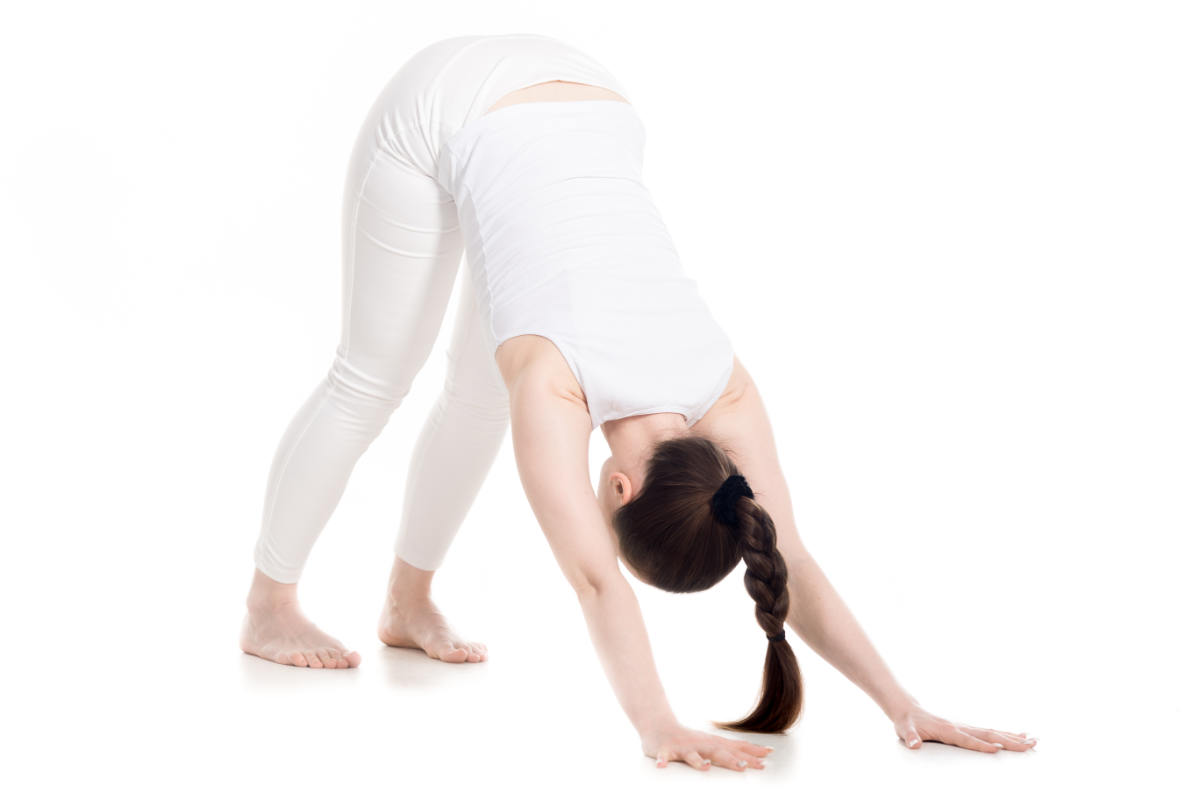 In this article I’ll continue my series on exploring common yoga alignment cues more deeply. I’m going to break down the idea of lining up the outsides of the feet with the outsides of the mat. This is a common cue given in many postures, especially standing forward bend and downward dog. In this post I’ll walk you through the anatomy that is directly influenced by this cue. Remembering that bodies are unique, we’ll take a look at the various impacts this cue might have in someone’s body and whether it really creates the intention we’re looking for.

Let’s start with some anatomy.

The foot/ankle below is in relationship to the knee above

Our base for downward dog is definitely our feet. We’re standing on them, right? Above the feet we have the knees, and above that, we have the hips. It makes sense then, that the orientation of the feet is related to what’s going on in the knees and hips above them. The same bone that forms the top of our ankle joint, the tibia, also forms the bottom of our knee joint. So if we move the foot, we are very likely changing the direction of the knee and hip joint, at least a little bit. So how should we align our feet and knees in downward dog then? I’ll suggest that our real intention in downward dog is not so much to point the feet straight, it’s to point the legs straight ahead. So what’s straight? Is it determined by the feet or the knees? And what does straight look like in the feet and the knees anyway?

Straight, in the feet, is not the outside edge of the foot lined up with the outside edge of the mat for most people. The actual midline of the foot runs through the second toe or between the second toe and third toe. If we line up the outsides of the feet with the outsides of the mat in downward dog, this would medially rotate the feet (turn the feet inward) a little bit for most people, and potentially a lot for others. And, as we said, if we move the feet, we’ve probably moved the knees too, or at least changed how force will run through the knees. The knees are a vulnerable joint which operate best when in a position to hinge with minimal rotation imposed. Putting the knees in a position that minimizes rotation also minimizes stresses on the inside or outside of the joint.

One of the most common issues I’ve seen from this in certain bodies, specifically those that have a stronger than normal turnout in their hip joints, such as dancers, is that the internal rotation required at the hip joint increases the tension in the tensor fascia latae muscle. This is the muscle that is part of managing the tension in the iliotibial band (IT band). The additional internal rotation of the hips from turning the feet in, can lead to the most common symptom of an overly tight IT band in postures other than downward dog, which is pain on the outside of the knee.

How should we line up the feet in downward dog?

So, how should we line up the feet in downward dog then? I’d suggest that our first intention is not to line up the feet, but rather to line up the knees, as they are the most vulnerable joint. The cue that I generally give students is to point the knees straight and then let the feet do what they need to do.

Will this cue create the intention we are seeking?

Now that we’ve reviewed some anatomy we can ask ourselves the question: Does the cue to line up the outsides of the feet with the outsides of the mat in downward dog create the intention we’re looking for? The short answer is no. More specifically, this cue often doesn’t result in the intention we’re seeking and, depending on the individual student’s body, it also has the potential to send tension or even pain through the knee joints.

If this cue to line up the outsides of the feet with the outsides of the mat in downward dog doesn’t really accomplish our intention, then where did it come from? One possibility is that the first person to use this cue chose it because they found that aligning the feet in a particular way felt good and worked for their body. They could then be trying to apply a cue that worked for them. What’s important in that case is to take the next step as a teacher and try to deconstruct WHY it might work in your body, and then see if you can determine, what, anatomically or functionally, is different if you align the feet in a particular way. That will give you more information and allow you to better apply directions for a student’s alignment based on what you are seeing in their practice.

Another reason that a teacher might use this cue to line up the outside of the feet with the outside of the mat in downward dog, is that they see that a student’s feet are turned out in such an exaggerated way that it is clear that that probably does need to change. A large amount of turning the feet out can also rotate the knees and/or send tension into the knee joints. In that case, some observation is necessary to see where the actual source for that external rotation, which is being expressed in the feet, is coming from.

Often that external rotation is coming from the hip joints. In that case, the feet probably do need to turn in, but a better cue would still be to point the knees straight ahead instead of lining up the feet. If we adjust our leg position to point the knees straight, our feet will likely come with them to the degree that it is possible for our body. As the muscles that externally rotate the hip joints gain more flexibility over some years of practice, you may find that they don’t pull the legs and feet out so much. In the shorter-term, start with pointing the knees forward and allow the feet to do what they need to do to accommodate that.

One reason I’ve also heard for using the cue to line the feet up with the outside of the mat in downward dog is that rotating the legs and feet internally separates the sit bones. I guess that could happen from this movement at the hip joints considering that we are also flexing the hip joints, but what amount of separation would happen and what value that would have is another question completely. In order for the sit bones to separate farther apart, space would have to be created at the SI joints where each side of the pelvis moves in relationship to the sacrum. If you read my previous article about how much the SI joint moves, you’ll know that the SI joint only moves about 3mm on average, so I question how much value that intention would have.

A last reason that some people might be inclined to use this cue to line the feet up with the outside of the mat in downward dog, is that alignment looks good to us visually. It’s important to remember in this case, that arbitrarily lining things up in the body may not be the most functional for our body. We all have patterns in the body that we pick up from the activities that we do, injuries or accidents we’ve had, and even the genetic structure that we inherited from our parents. This all adds up to having bodies that are not perfectly symmetrical or perfectly balanced. Trying to force alignment on a body when it is not really functional at that time can lead to pain and injury.

As we give cues to help students find their way into postures, it’s important to remember that everyone arrives with a unique set of body patterns. It’s very important then, to keep checking ourselves as teachers to see if the cues and suggestions we are giving students are actually taking them in the direction that we’re intending. If not, then it’s time to reconsider the cue that we’re using and try another approach.