Read the comments below as there is a significant amount of information there!

As a preface, there was an original question asking if someone could explain what nutation and counternutation actually were and how they might relate to backbending type postures such as ustrasana, kapotasana, and urdhva dhanurasana.

As often happens in the blogosphere, people comment, and in an effort to help, sometimes add to the confusion. A student of mine from the D.C. area asked me to weigh in and see if I could simplify and/or correct what others were saying about this topic. There was some confusion between pelvic movements and movements of the sacroiliac joint. Here’s what I wrote:

I’m hoping that I can bring a little bit of simplicity to this conversation.

There are two movements that are getting mixed together here. First, there is pelvic tilting which is described as an anterior tilt and a posterior tilt. These are defined and discussed from neutral or what is referred to as anatomical position (someone standing upright – tadasana basically)

Nutation and counternutation are movements that happen at the sacroiliac joint. The sacroiliac joint is where the sacrum meets the two sides of the pelvis. Nutation (from neutral again) is where the top part of the sacrum would move down and forward relative to the pelvis being fixed in place. Kapandji referenced above describes this as the sacral base moving forward and down. Counternutation is simply the opposite.

Everyone, unless their sacroiliac joint is fused, does some nutation and counternutation. The average person probably has, at most, somewhere between 3 and 5 millimeters of movement at their sacroiliac joint. In other words, not a whole lot. I’m surprised sometimes by how much emphasis is put on this movement happening in backbending type poses when such a small range of motion is possible at the sacroiliac joint.

It is a good idea to consider all of the factors that go into a backbend and not get caught up in the part that moves the least. A good or deep backbend has much more to do with the hip flexors, such as quadriceps, adductors, and the iliopsoas, being open enough to allow the pelvis to move smoothly. When the muscles surrounding the pelvis allow it to move smoothly in backbending, it does not get jammed up in an anterior tilt and compress the lumbar region.

To clarify, since the question is regarding nutation and counter nutation, when one is in a deep backbend, your pelvis (relative to neutral) is in an anterior tilt. These forces will naturally put a force on the sacroiliac joint and if we look at the movement created there it would be counternutation. It is also possible for the sacrum to maintain its relationship with the pelvis. In that situation, if we took away all of the ligaments somehow, the forces on it would be counternutation.

This in no way speaks to what one’s intention might be while in a backbending pose though. You might naturally try to undo some of the pelvic tilt, as people do when trying to tuck the tailbone under. This would be trying to tip the pelvis more into a posterior tilt from an already extremely anteriorly tilted position. So it’s not going to put the pelvis into a posteriorly tilted position because you’re not starting from neutral. If you do this, it would undo some of the counternutation and potentially allow the sacrum to nutate slightly.

People who are naturally flexible will have more movement at their sacroiliac joint. They may actually feel this, or control this movement better than the average person. I certainly can’t argue with anyone’s experience.

I also wouldn’t suggest trying to get a student to do this movement specifically. It will either happen or not happen on its own. However, if someone is dealing with sacroiliac dysfunction or pain, it would then be appropriate to pay more attention to how much or little of this movement is happening. 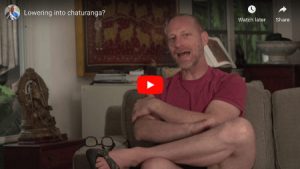