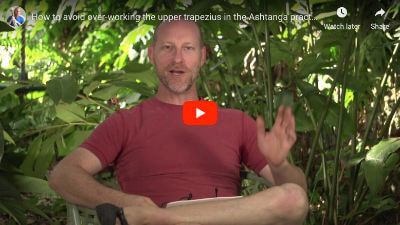 Transcript below of: How do I avoid overworking the upper trapezius in the Ashtanga practice?

“How can we avoid overworking the upper trapezius in the Ashtanga method? I try to activate the arms and shoulders as much as possible by pressing through the hands, index knuckle etc, but it seems to me that all the jump throughs and jump backs (especially the latter) seem to inevitably put some strain on the upper trapezius, and in the long run create some imbalance in the upper body. Do you have any suggestions?”

That’s a good question. There are a couple of things to look at here. One is, always keep in mind that the trapezius is a very complex muscle. It literally does opposite actions of itself. It spans quite a large area, with the lower half pulling the scapulae down and the upper part pulling them up. There’s all of that. But I think the bigger piece is that, as we all know, most people hold stress in their upper trapezius. It’s a more superficial muscle so it has this tendency to be developed in a pattern that causes it to contract first, or to be part of a pattern of contraction from the beginning. So, what you want to pay attention to, when thinking about overworking the upper trapezius, is whether the trapezius is activating as part of a habitual pattern.

For me, I always bring it back — and there are a couple more questions here that I’m going to answer that are related — to serratus anterior. And, if you go to my site, you can click the search bar and type in serratus anterior.  You’ll find a few articles there including a whole series of articles that I wrote on sun salutations. A few of them very specifically talk about serratus and developing it throughout a process.

So, yes, I’m sure you’re pushing through your arms. I have no doubt. There’s no way that you could jump forward, jump back, and do all of that without pressing through your hands. The question is what’s being activated first. So, it’s not that you don’t want to use trapezius or that trapezius isn’t going to contract. A lot of the time what we need to do is retrain things. In other words, we retrain it in a way that the muscle that we want to be predominant starts to be more primary rather than secondary.

I’m sure you already are using your serratus, but it’s not the primary mover in this particular movement. So, when you press into your hands you have to press in a way that activates that armpit. Okay, so that’s my suggestion for you. Maybe reevaluate and pay closer attention to how things are activated. Make it a little bit more nuanced and notice a little bit more detail of what’s firing first. If you’re letting your elbows go out and your arms go out this way, there’s a good chance that that is going to cause trapezius to fire before serratus. Keeping the arms and the elbows tucked in a little bit more is going to help that serratus go.

So, I hope that answered your question. Anybody else, again, if you’ve got a question, go to yoganatomy.com/myquestion. 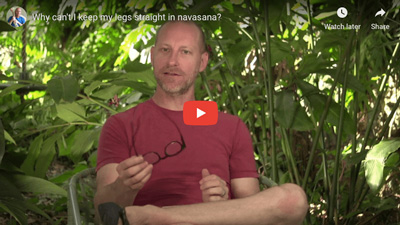