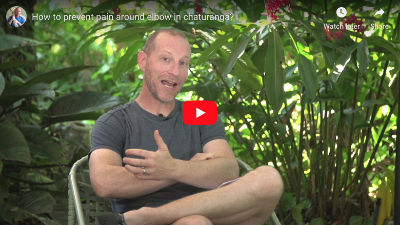 How Do I Prevent Elbow Pain In Chaturanga?

Transcript of: How do I prevent elbow pain in chaturanga?

Hey everybody! Welcome to this month’s question of the month. As you know, every month I have a seat and answer one of those questions that you’ve submitted through the website. If you want to submit a question, you go to yoganatomy.com/myquestion. So, this month’s question comes from Johanna and it is about elbow pain in chaturanga.

I’ve started to experience pain in my elbows, mainly around the olecranon where the triceps insert and the lateral epicondylar area. The pain usually creeps up when I’m doing the seated postures in primary series (I’m a new practitioner), while lowering down to chaturanga from high plank. I know chaturanga itself works the triceps, but my muscle itself isn’t tired at that point. What can I do to not stress the area so much? Should I work on alignment, strength?

One thing, because you mention strength here, one thing to remember is whenever something hurts it doesn’t mean that it needs to be strengthened. Of course it’s a possibility. But, and I’m not even talking to you specifically Johanna, but across the board this happens a lot that when something hurts people think that something must be weak and it needs to be strengthened. That is not true. That is deductively invalid. It is possible sometimes, but that’s not necessarily the starting point.

Having said that, in your case, the elbow pain in chaturanga could be a strength thing. My intuition tells me that because you mention you’re a new practitioner — when we start doing new movements, and I know you’re not describing muscle soreness, I understand — but, when we take on new movements, if we do a lot of it, or in a way too much too soon, too frequently, it leads to stuff like this. So, my guess is it’s because you’re a new practitioner and you’re using muscles in a way that you haven’t been. Even though you have strong triceps and you say that they don’t feel tired, it could be enough that it’s irritating the attachment area of the triceps. So, that’s my sense. You may also want to read Elbow Pain: Finding the Source of Your Elbow Tendinitis.

Elbow pain in chaturanga could also be an alignment issue, but I doubt it. But, it is a possibility. So, if you’re doing elbows in really tight, maybe let them breathe a little bit and pop out a little bit. If they’re popping out a little too much, try bringing them in. It’s certainly worth a test.

But my sense is, probably reduce the amount of work you’re doing. Like, maybe you’ve gone too far into the series with too many chaturangas. That’s my sense of what’s really going on. It does also sound like something that probably will pass if you keep going through it. It happens a lot with wrists as well where there’s this sort of period of time for new practitioners where their wrists start to bother them because they’re stretching muscles and putting pressure into places where you don’t normally and your body starts to react to that. It sounds like something like that to me as well.

Alright! I hope that helped a little bit. Everyone else, if you’ve got a question that you want me to answer, go to yoganatomy.com/myquestion.