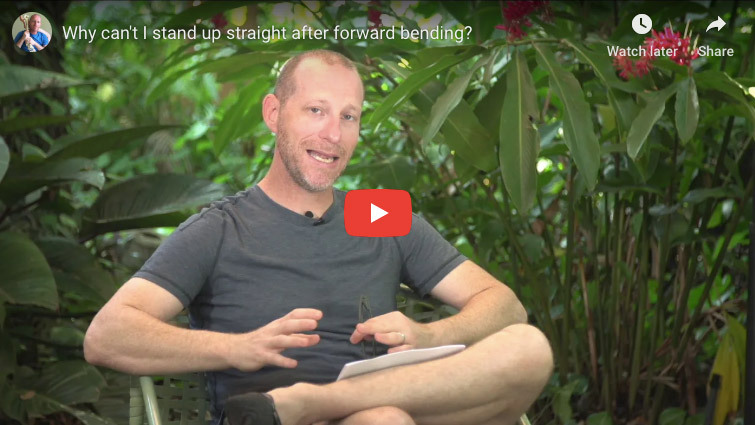 Why Can’t I Stand Up Straight After Forward Bending?

Transcript of: Why can’t I stand up straight after forward bending?

Hey everybody! Welcome to another question of the month. As you know, every month I take a question that’s been submitted from yoganatomy.com/myquestion and we spin it up and we answer those questions. So, here we go. This question is from Moti who asks how to stand up straight after forward bending.

“My question is regarding forward bends, and specifically, the pain in the lower back after bending. I have been practicing Iyengar yoga for a few years, plus visiting the gym to keep my muscles strong. After performing forward folds, not only at yoga, but also after sitting or riding my bicycle, I find that I need a long time until I am able to fully stand straight and straighten my back. I do not have back injuries. My yoga teacher said it has to do with the fact that I am not stretching my frontal spine before I bend forward and I also have to “collect/gather” my muscles around the lumbar spine before I bend. He said they have to be contracted and not loose. Can you please help me understand what is going on here?”

There could be something to what your teacher says. That description of collecting and gathering, you know, that’s a felt sense kind of description of engaging the tissues, so the muscles are already there. What they’re talking about is stabilizing. And, there could be a need to do some stabilizing there. But my guess, and I have to say, I do believe there’s also something to lengthening the front of the body first that would be potentially preventative. And that’s an easy one to test. Do a backbend before you do the forward bend. Does it change what’s going on there?

But, there are a couple of other things. One is, especially because you mentioned that this happens outside of practice when sitting or riding a bicycle, that brings me more to: your psoas is probably way too tight. Or, more generally, I mean I go after psoas because it’s popular really, no just kidding, I go after psoas because it is the strongest hip flexor. But, the other layers of hip flexors, like quadriceps and adductors could also be part of it. And, when we say psoas, we also mean iliacus. Together, remember, they make the iliopsoas muscle. And, when those are tight, when hip flexors are tight, they’re going to make it harder to extend the hip joint, which is basically what you’re talking about, unless I’m misunderstanding something here.

So, doing backbending type movements prior to forward folding could lengthen those muscles before they get contracted when doing the forward folds, so that is a possibility. The other thing is — this would be another level of potential problem and I’m not saying that this is true; I really don’t know — but, sometimes SI joint imbalances can lead to feeling like you’re stuck and you can’t straighten out your spine or stand up straight after forward bending fully, so psoas is going to be connected to that as well. That’s why I really emphasized psoas earlier.

So, that’s where I would start. You want to check your psoas. Try to notice if it’s more one-sided or if both sides equally sort of feel like they’re having trouble straightening out. You can test what your teacher suggested by doing some backbending before. And long-term, it sounds like you need to open hip flexors and front lines of the body.

Alright, I hope that helped. Everyone else, remember you can submit your own question by going to yoganatomy.com/myquestion.