Landing and Lowering into Chaturanga

Which brings us to the next piece of sun salutations: Should you land in a high plank or in chaturanga?

As usual there are arguments to be made for both. As I typically do, I see them both in a larger context of how either one is going to be creating a pattern of movement. The more important question that you should ask yourself is, which patterns are you trying to cultivate and why?

It seems many people, at least in the Ashtanga world, default to jumping back into chaturanga. It is, after all, the most traditional approach. I would even suggest that this is an ideal that we should head for if the right patterns are in place. It’s reason enough for me that tradition is important. Therefore if you want to aim toward the tradition, jump back into chaturanga. However, if the right patterns are not in place, you may become a victim of chaturanga (check out my previous article – Just Blame Chaturanga).

You’re probably well aware of the anatomical side of my thinking and the context of practice that we are working in. This leads me into my own stories about why people should jump back into high plank and then lower down, especially beginners. Yes, I have a bias.

Beginners are often in need of developing the pattern I’ve been talking about in Part 4 and Part 5 of this sun salutation series. That pattern is the development of:

Me and My Bias

Since I am biased toward landing in high plank, most of my pros are going to land on that side. But don’t get me wrong. It’s not that I think landing in chaturanga is wrong or bad, I’m just focused on developing good anatomical patterns that support it first.

The truth is, if you land improperly in either version, you can cause problems. If done rigidly, landing in both high plank or chaturanga can be jarring. If the landing is done too loosely, then there is that “sag” that happens in the lower back and SI joint area. I usually see the landing action in two parts. The first important part is that the relationship to controlling the movement be in place. This is related to the idea of core. The second important reason that my bias is for landing in high plank is that, when landing in chaturanga, there can be a directional problem with how the feet hit the floor and the body moves. The feet and body should be heading more back than down.

I am more likely to find people with issues in jumping back into chaturanga. But my data is skewed. The common problems I see include:

I often see yoga practitioners, and not just beginners, jump back into chaturanga and basically just take advantage of gravity. By this I mean they are not using any strength to resist the effects of gravity. If gravity is taking you down, why fight it? Well, how about control?

By isolating the movements, that is, jumping back into high plank first, you can develop control over this transition. If you’ve been jumping back into chaturanga for some time, it can be quite difficult to jump back to high plank with straight arms. I see this as the first step in redeveloping the pattern of jumping back. The pattern of bending the elbows is just so ingrained it’s difficult to shut it off. The second part of developing the new pattern is the part that many people seem to want to avoid: lowering down into a high quality chaturanga. What is a high quality chaturanga anyway?

In order to control the jump back into chaturanga, these two separate patterns need to be in place already. If not, we default into letting gravity do the work for us and we may lose some of the control we really should have.

Jumping back with straight arms does not seem that difficult. It isn’t really, just don’t bend your elbows. What this does though, is force you to use and engage muscles more closely related to the core.

It’s the pattern of lowering down into chaturanga that is even more important. It leads us back to the question, what is a high quality chaturanga anyway?

For me it’s one where the serratus anterior remains engaged. Not to overly complicate it, but when you lower down into chaturanga, it’s your serratus that you’re really after to keep the shoulders in a good place. For instance, when you see that worrisome chaturanga where the shoulders have dipped too low and tilted forward, this shows me a lack of stability in the shoulder girdle.

When serratus is engaged during the lowering down, it is resisting the movement of the shoulder blades heading toward one another. Don’t get me wrong, they are going to head toward each other in what we call retraction. Although there is sometimes a verbal cue to pull the shoulder blades together, it’s not one I subscribe to. If you do, it’s ok, we can disagree.

What I want is to resist this action with the serratus, which is a powerful protractor (bringing the shoulder blades around the front). When the serratus contracts to resist retraction it is doing what we call an isotonic eccentric contraction. In essence it is contracting and lengthening simultaneously. This is discussed in Functional Anatomy of Yoga on p. 29 (1st ed.). I also discuss this concept clearly in The Basics of Applied Anatomy Course.

With the shoulder girdle in neutral, the real focus of movement comes into the elbow joint.
This is where the triceps come into play. As we lower down from a high plank, the triceps is also doing an eccentric contraction. Its contraction is resisting our downward movement. This creates a controlled lowering down. I realize, this isn’t easy for everyone and can take a long time to develop. My point is, develop it on the right foundation, a stable shoulder girdle.

Moving forward it’s time to move on from the arms and into upward facing dog. Parts of it are tied to the jump back, the distance that our feet are from our hands, and especially how we head into the yoga posture from our beloved chaturanga (related post – Just Blame Chaturanga).

Feel free to leave your comments below and point out the holes in my story. 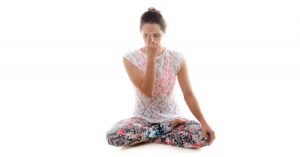 How Does Pranayama Affect Our Physiology?

Pranayama affects our physiology in many positive ways. Learn how yogic breathing practices may affect us from this recent research study. 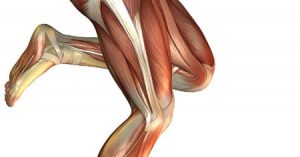 The Knee Joint And Yoga: An In-depth Guide

Knee pain and injuries are common in the general population as well as in the practice of yoga. Here we take a wide perspective and look at the basic function of the knee joint, what structures are located around the knee, where problems tend to arise during yoga practice, and finally, what you can do about knee pain. Read our most in-depth knee post which will help you more fully understand what is going on in the knee, as well as lead you to other great articles that we’ve previously written. 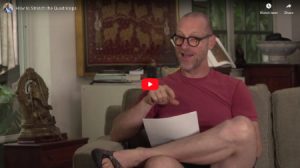 How To Stretch The Quadriceps

David shares his favorite way to stretch the quadriceps. He describes how he uses a modified virasana to prepare for doing backbends.