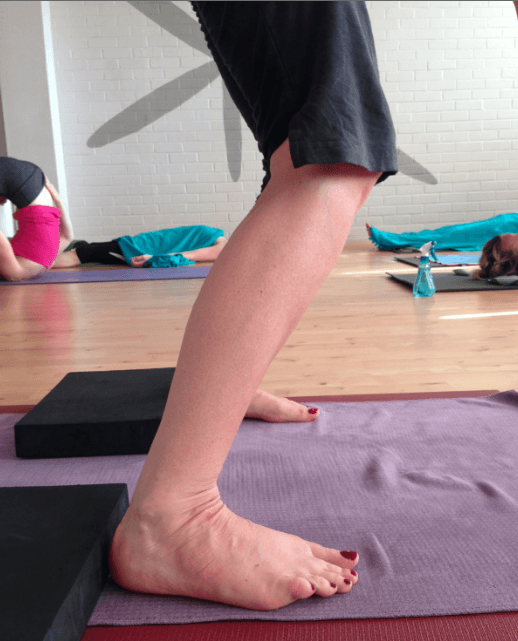 Want to keep your feet straight in a yoga dropback?

The inspiration for this month’s article comes from a question posed in an email. The question from Catherine asks specifically about keeping the feet straight in a yoga dropback. For those of you who are not sure what a drop back is: it’s when you stand at the front of your mat and drop backward into a backbend. It’s mostly the Ashtangis who do this. When they do a dropback it’s very typical to find them turning their feet out as they go back and/or as they come back up from the backbend.

Although we can’t really talk about a yoga dropback without also talking about backbending, this would mean a really long article, possibly even a book. Perhaps I’ll leave the backbending aspect of this until next time.

By the way, I have an awesome Online Dropback Workshop that gives you specific techniques to help you refine your drop-back. You should definitely check it out!

Well, let’s get to it already. Why do we turn our feet out in the first place? For those of you doing it, it seems unavoidable, no? It feels as if you’ll crash and burn, or never, ever be able to get up from your backbend if you don’t turn your feet out. Well, you all just might be right.

There are a few common reasons why people turn their feet out when dropping back.

The first reason is to “avoid” the hip flexors. What I mean by “avoid” is not some conscious decision to not work with them. Not at all; it’s an unconscious pattern that happens in the body. Your body will usually follow the path of least resistance. In other words, it will try to create your larger desire in the easiest way possible.

It almost sounds like a good idea except for a couple of things. If you continually avoid your hip flexors, they’ll never open. A more important concern is the pressure placed onto the knee joints below the hips. With the feet turned out, you move through the knee joints in a sideways direction while they’re rotated. I’m not sure about you, but I think that long term, this isn’t a good idea.

On the flip side, it’s possible that too much hip flexor tension can lead to a compression of the lower back in some people. The reason for this is that the hip flexors, when tight, will pull the pelvis forward when we start to drop back. This means that more bending is required in the lumbar spine which isn’t always pleasant and can often feel compressive. 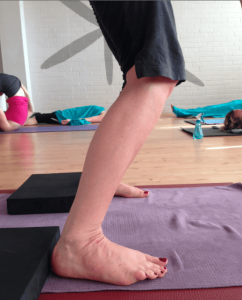 When you try to drop back and have tight Achilles tendons, your body is going to want do one of two things, either lift the heels up, or turn the feet out. This is because, once again, if you are keeping your feet straight, then the movement has to pass through both the Achilles tendons as well as the hip flexors. It’s also worth mentioning that it’s possible that the heels come up because the hip flexors themselves are tight. In this case, when the heels lift, it elevates the pelvis to reduce the pressure on the hip flexors.

It is possible that those who turn their feet out have developed a pattern of over-squeezing their buttocks when backbending and when doing related yoga postures such as upward facing dog, ustrasana, etc. If that pattern is in place then it’s likely to show up here in dropbacks as well. When the buttocks tighten, the large gluteus maximus contracts. Since one of its functions is to externally rotate the thighs at the hip joint, this rotation simply makes its way down to the feet as well.

It is possible to use the glutes to work only in their function as a hip extender and not as a rotator of the hip joint. This is more subtle work and requires the activation of muscles such as the adductors which internally rotate and adduct the hip joint. Their engagement can balance out the rotational factor of the glutes and help prevent overly rotating the legs and feet.

There are two potential problems with this and therefore reasons to try and avoid it. For one, when the buttocks are engaged like this, it also has the potential to load pressure into the lower back. It does this in a different way than if the hip flexors are tight though. In this case the pressure has a tendency to come via the sacrum, sacroiliac joint, and then up into the lower back.

Trying to Land Too Close

It is also possible that when you drop back, you are trying to land too close to your feet. Obviously, you can’t land too far away. With the natural fear that is included in dropping back (especially in the beginning) it is really common to see people essentially trying to land their hands too close to their feet.

Although we might say this is a good goal, or a valid intention, it can also lead to the same pattern that we’re talking about here. If your spine isn’t open enough, and your hip flexors/Achilles tendons aren’t open enough, then there isn’t enough space in the front of the body for the hands to land so close to the feet. The result once again is that something must compensate, which is the hip flexors and the ankles. They compensate by lifting the heels. Sometimes there is so much tension that if there is an attempt to come back up from this position it leads to a flinging of the body, as if a tight rubberband was just released. So, check in with the distance you end up with between your hands and your feet when you land.

Rocking on the Edge of the Foot is Easier

Some of these patterns and problems are simply a result of your anatomy. You may have hips that are more inclined toward external rotation. It could be because of the shape of your hip joint. It’s not to say that you shouldn’t work on internally rotating though; you should.

If you have particularly tight hip flexors, you should open them up before you even start doing your backbends, much less dropbacks. I discuss this pretty thoroughly in my YogAnatomy DVDs and in workshops. Without open hip flexors, there is naturally more pressure in the lower back during backbends. As we just discussed, tight hip flexors will add to the body’s desire to avoid the hip flexors when dropping back and coming up from a backbend.

If you happen to be the person with tighter Achilles tendons than average, not only are you going to want to work on opening them, but you might consider changing the technique of how you work with dropbacks.

The most common concept I find myself describing to students is working through the chain of joints that make up their leg. That is, all three joints, the ankles, knees, and hip joints, have to relate to one another; they have to move in synchronicity. The knees are at the center of this chain of joints and what you do with them has a direct effect on what happens with the other two joints.

By working through the knees we are trying to send them forward in a way that keeps the alignment through the leg. Most people don’t realize how much the knee has to bend when doing the yoga dropback and stand up (unless your spine is like a noodle).

Bending the knees means that they get out in front of the ankles. It’s not that they bend and then you fall back. Instead, they bend and move forward simultaneously. When the knees move out in front of your ankles, your pelvis will also move forward. This means that your body’s center of gravity in the pelvis stays in front of the feet, which are the foundation you are working with. Once again, to focus on moving the knees in this way, your Achilles tendons and hip flexors have to be open.

My point here is that, if you’re not working with this pattern and instead are trying to stand up from your hip joints rather than sending your knees forward, then you’re unlikely to get up and you are more likely to turn the feet out. 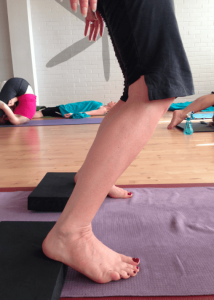 Notice that the knees are further out in front of the toes.

There are two adjustments/modifications I commonly make when I’m working with a student who has this pattern.  In the first, I place something under the heels of the person dropping back. What I place under the heals depends on how tight their Achilles tendons or hip flexors are. I might use thin blocks; a rolled up yoga mat also works really well.

Dropbacks are very complicated. I have done my best to focus on the aspect of them that I was asked about. It is always important to see these individual parts of a yoga posture as parts of a whole. This is, in fact, the strongest intention of all of my teaching: integrating the parts and pieces of the anatomy, the practice, and ultimately the individual.

There are pages and pages to write about dropbacks. There are many other parts to consider than what I’ve discussed in this already too long article!  I think we’ll consider backbends and this same idea while it’s static in another article!  If you are interested in learning more about the methods of working with dropbacks, I discuss this topic thoroughly in my Yoga Adjustments DVD set.
Namaste,
David 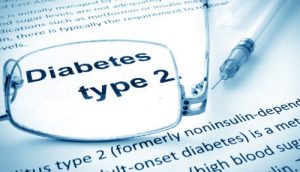 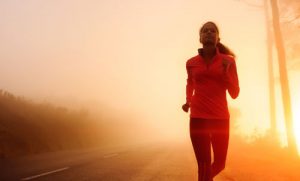 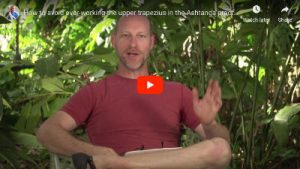