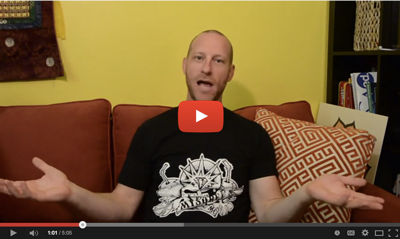 What Are Those Popping Sounds?

What are those popping sounds when practicing yoga?

“I have read various things about clicking and popping sounds with joints during yoga. For example, I find students and myself frequently have a pop noise from their hips as they enter trikonasana.

Could you offer some thoughts on whether these noises can be indicative of problems, or if they are more often a natural part of the body working?

I’ve also spoken to some teachers that talk about different types of sounds. For example, something that pops once when released versus something that seems to click-creek every time it is worked. Are these different?

Should that be a consideration when we are looking at whether they are problematic?”

Katie, this is one of the most common questions I get when I teach workshops. There are definitely different types of sounds in the body. Everybody has sounds in their body. Every time I ask the question “Is there anybody in the room who doesn’t make sounds when they practice within their body?” Nobody’s hand goes up.

So popping, clicking, and cracking sounds are actually pretty natural. However if they’re associated with pain in the joint, or that body area after the pop has happened, that’s a problem. So we want to avoid that. So let’s take a look at the first one—trikonasana—classic place. There are two possible pops that happen here.

The first one is just tissue. Probably—it’s usually hamstring or hamstring adductor kind of—they mix together where they attach on the sit bone. And when you lean over into trikonasana on that front leg sometimes you’ll have a pop as the sheets of fascia either separate from one another—not in an injurious way—but the tissue separates and makes a pop or a click sound.

And then the other possibility which gets to the releasing kind of pop is synovial joints—that is, the most mobile joints in our body like our knee, our hip—have a certain amount of fluid and pressure within them, and what happens is, through metabolic processes of movement, the synovial fluid kind of breaks down and becomes—or changes into a gaseous state.

And then, because it’s a capsule—which means it’s encapsulating the ends of the bones, and it’s a capsule in the sense that it has created this boundary—when you change the pressure in that capsule, what happens is you get a popping sound. And the popping sound is literally that gaseous bubble that has formed collapsing back down into the fluid state. It’s not gas that shouldn’t be there. It’s not gas that gets released out of the joint. It actually forces a collapse of that gas back down to a fluid state. And that’s the exact—that’s the same type of popping or cracking we have if we adjust our neck, or we go to the chiropractor and they adjust us, that’s the same popping. That’s the type that you can’t repeat right away. It takes time for that to happen.

Going on to the repetitive movements, there is sometimes if you maybe moved your wrist, or you move your shoulder in a particular way, it either clicks, or creeks, or even makes I’ll say a grinding sound, but it’s more indicative of just a little bit more friction in that area. That’s another type of clicking, or popping that happens. They’re not always indicative of it being a problem, but they are indicative of maybe additional tension in that area creating that—if it’s a friction thing—creating that additional friction. Or sometimes that clicking, or popping sound is tendon over tendon, or tendon over the edge of a bone or tendon over a ligament, something like that. And that’s why it’s repeatable over and over again. It’s completely different than what we talked about in the synovial joint.

So those are good ways to differentiate them. If they’re repeated then it’s probably related to tension, and a tensional pattern, although it could be body structure. If it’s a pop that happens once—you can’t repeat it—that’s most always at a joint. Trikonasana was that classic one, which is tissue separating. You can feel it in either of those two places in trikonasana.

Anyway, I hope that answers your question. If you want to submit a question, go to yoganatomy.com/myquestion. Drop me a question and I’ll answer it just like this. And before I go, I wrote this book it’s called Functional Anatomy of Yoga and this book might help you answer your own questions. So get a copy. All right. Take care. Bye-bye.