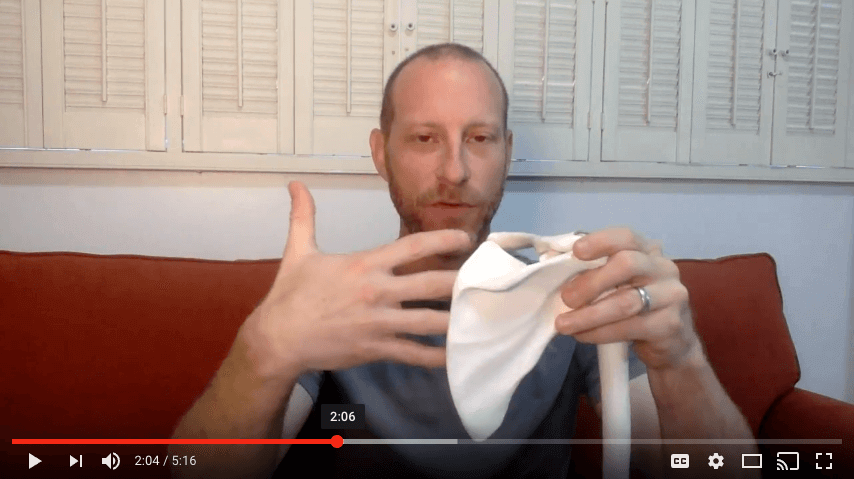 Winged Scapula, What Are Those Shoulder Blades Doing?

Transcript Below Of: Winged Scapula: What Are Those Shoulder Blades Doing?

All right, this month’s question of the month regarding winged scapula comes from Matt. Matt asks a really good question.

“Hi David. Can you explain the mechanism behind winging of the scapula, for example, in the “lower to chaturanga” or parsvottanasana? Is the pattern detrimental or an indicator of an underlying problem? What can be done to improve the situation. Thanks.”

All right Matt. It’s a big question. It’s simple and complicated at the same time, which is how anatomy often is. I’ll say this from the beginning though, there’s this book called Functional Anatomy of Yoga, and on page 216 (1st ed.), I’m winging my scapulas for you there. It’s part of a much bigger thing, but I’ll bring it back to one particular muscle, which is called serratus anterior. And for me, serratus represents the foundation of the shoulder when you’re in a position like chaturanga for instance. It sets up the stability from which you move at the shoulder joint and the elbow joint when you lower down into a posture like chaturanga. In my mind, it’s the part that most people are missing. I tend to believe that it’s what leads to most of the problems in chaturanga in people’s shoulders and biceps. When you’re not operating and moving functionally from a strong foundation, what you’re doing is taking all of the smaller muscles around the shoulder and you’re asking them to work from a mechanical disadvantage.

Ok. Let’s define winged scapula for you, now that I laid all of that out, and we’ll talk about serratus a little bit more. So winged scapula is when: imagine that you were looking at somebody from behind. My fingers represent their ribcage. If the shoulder blade was sticking off the ribcage like this, we would call that the condition known as winged scapula. What’s the cause of winged scapula? A weakened serratus anterior muscle. Now, in terms of the larger population and that condition, that could be because of nerve damage, atrophy of the muscle, or an injury of the muscle. There are probably a few other reasons why that can happen.

What we’re talking about is putting ourselves in a position that leads our scapulas to wing, which is slightly different. So, it’s not like we have an underlying problem, as in the condition, but it does say that we have a weakness in our serratus anterior or we’re not focused on that part while doing chaturanga. In our case, let’s bring it back a step. Let’s just say high plank.  Most people, if they’re lowering down into chaturanga with winged shoulders, when you put them in high plank, you’re going to see the shoulder blades winging as well. You may also want to ask Should We Jump Into Plank or Chaturanga Position?

There are lots of ways to work with serratus anterior. I do it in workshops all the time, but I think this will be the simplest one to follow along with. Go into high plank. When you push into the floor or the moment you’re in high plank, your muscles are turned on and you’re resisting gravity so you don’t collapse to the floor, most people are only engaging at their triceps to keep their arms straight.

What I want you to do is push into the floor and notice how, of course your triceps and your arms in general engage to do that and then see if you can push in a way that makes your shoulder blade protract or come around the front. Now, because you’re in a horizontal position, what’s really going to happen is your chest is going to lift between your shoulder blades slightly. That would be serratus turning on. Then the next step, which is much more complicated and probably beyond me just describing in words, is maintaining that contraction in serratus, that resistance, while also lowering down at the same time.

So technically, I would say that people are probably not going to injure their scapula because it’s winged when they lower down. It doesn’t look great to teachers of course, nor to me, but what is going to happen is you’re going to be putting those other muscles at a mechanical disadvantage. I personally believe that this is what leads to lots of other shoulder problems in chaturanga and why chaturanga gets blamed for so many shoulder issues. The base, the foundation, serratus anterior, is not being engaged. Here is another resource: What Poses Will Strengthen Serratus Anterior or What Poses Will Strengthen Serratus Anterior.

All right, if you’ve got a question, you can submit it to me as well. Go to: http://www.yoganatomy.com/myquestion