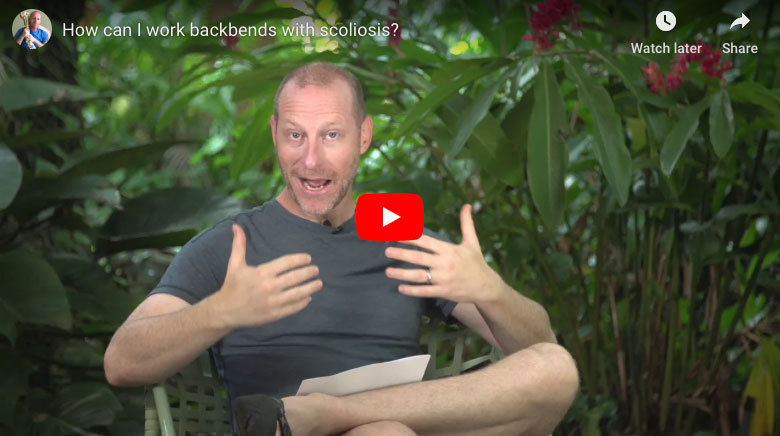 How Can I Work Backbends With Scoliosis?

Transcript of: How can I work backbends with scoliosis?

She says, “Hi David. I’ve been practicing yoga the last 7 years and teaching yoga the last 4 years. I have a compensated scoliosis, 30 degrees lumbar curve, 25 degrees thoracic curve. Since I’ve been practicing yoga, my spine flexibility has improved a lot. But still, when it comes to backbends, I have a hard time. I feel stuck, like my spine won’t expand any more. Is there any way [that] you recommend someone with scoliosis can work on their backbends? Any idea would be appreciated. Thank you so much!”

So, a couple of things come to mind. One, of course you know, with scoliosis, depending on how yours is put together, I mean you have the degrees there, but functionally they change from person to person. Even if you had the same degrees exactly where it happens, that affects everything. So, that’s underlying any answer I give. You have to modify for your specific circumstances. You may want to read Can Yoga Fix Scoliosis?

So the biggest part is, one is, probably not to focus on trying to bend your spine too much anyway. Because with that curve there the function changes. To work backbends with scoliosis, you don’t want to think of your backbend being like everybody else’s, in other words, right? The bigger part, I think — and again it’s always hard because I’m not seeing you do your backbend or seeing how your body functions to be able to give you a really specific answer, so I have to keep it somewhat general — but a big component of scoliosis is that there is a pelvic distortion. In other words, one side of your pelvis is going to be tilted down and forward, more than likely, or the other one back. I’m going to assume that’s the case.

The other important part of a backbend is the hip flexors. And when one side of your pelvis is tilted forward and down like that, it usually implies that the hip flexors on that side — which include psoas, quadriceps, adductors potentially, maybe even tensor fascia latae, all of those — if they’re tight they are going to prevent your pelvis from being able to tilt, which is actually going to force compression into the low back. That’s generally true in backbending. And, in your case, the resistance, for your back expanding or opening as you describe it, may have to do more with other stuff. And, the first thing I would look at would be the hip flexors. Definitely read The Anatomy of Backbends.

Either way, give a little test of that. You can always test your hip flexors by kind of doing a hero’s pose and notice what the pelvis likes to do on both sides. Because both of those put a lot of pressure on the hip flexors, and as a result of that, if there’s more tension on one side, you’re going to see the bumps on the front of your pelvis — or technically the ASIS, anterior superior iliac spine — more down or lower or sticking up, or something like that. So, look to that and then try to address that and see if that affects your spine. That’s where I would start to work backbends with scoliosis. Alright? I hope that helps. Everyone else, thanks again for watching. You can always submit your own question by going to yoganatomy.com/myquestion. Have a good one!