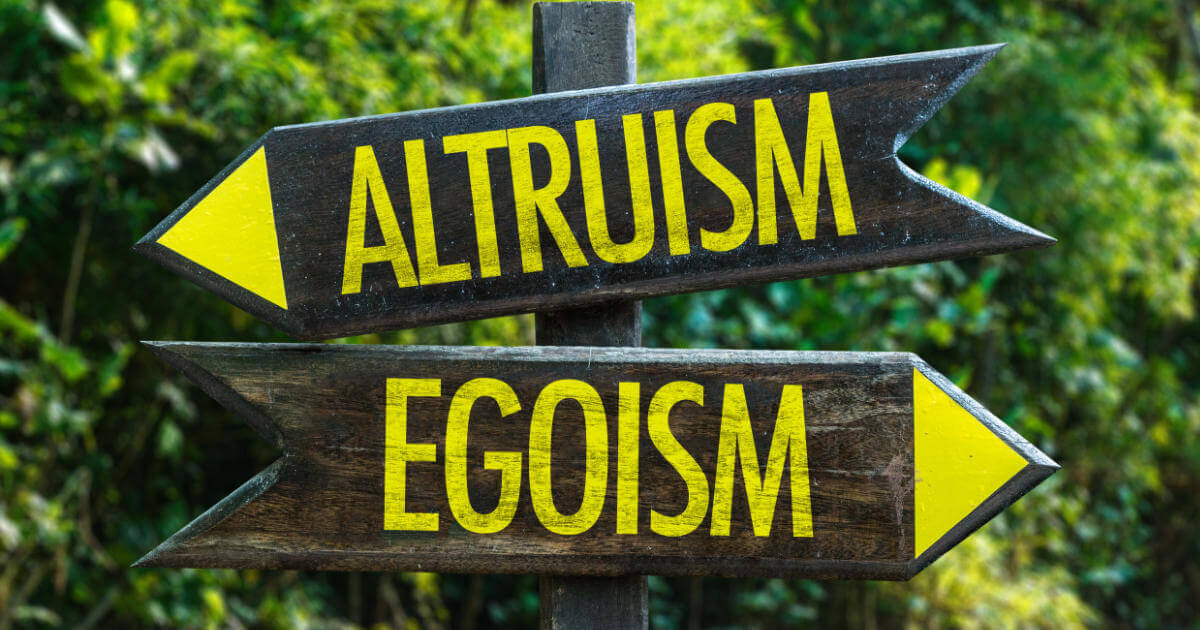 In part two, 109 business management graduate students completed the same psychological scales before, immediately after, and four months after completing an 8-week management course. Half the students did a twice-weekly yoga practice as part of the course, while the other half served as the control group and did not practice yoga.

The positive change in the yoga treatment group was significantly greater than the control group for the psychological capital and altruism scales. When participants completed the evaluations four months after completing the course, subjective vitality and self-transcendence were higher in the yoga treatment group than in the control group. Additionally, the researchers found that subjective vitality and self-transcendence both indirectly affected altruism via their effects on psychological capital.

Yoga practices have the potential to increase altruism in practitioners.

The concept of altruism refers to voluntarily making decisions based on how the outcome will likely affect others, not just yourself. There are many situations in which increasing altruistic behavior benefits both an individual and their community. Yoga improves physical health and wellness, and positively affects mental dimensions, such as concentration. However, it’s uncertain if, and how, yoga practice affects social behaviors, such as an increase in altruism.

The authors of the research summarized here are particularly interested in how yoga practice impacts pro-social behavior of managers within corporations. They note that there are many examples in the media of selfish and self-centered behavior by company managers. Increasing altruistic behavior of corporation managers could benefit both clients and the corporations. But, as the researchers note, there is very little research on how to intentionally increase altruistic behavior. In this research study, they explore the question of whether yoga practices could increase altruism.

The research team conducted a two-part experiment. In part one they recruited 342 working professionals who were also enrolled in post-graduate business management programs at two universities in India. The participants had an average of 6.3 years of work experience and their mean age was 32.4 years old. The sample was 17% female and 83% male.

The participants in part one of the experiment completed a survey to examine their levels of three psychological states and their relationship to altruism. Those were: psychological capital, subjective vitality, and self-transcendence. Psychological capital is a concept that describes the level of person’s will and confidence to try new or challenging things, their optimism and hope for succeeding in that process, and their resilience when success isn’t immediate. Subjective vitality is a measure of a person’s energy with which they approach their day-to-day life. Self-transcendence is a concept that describes the level of a person’s world-view as non-egocentric.

In part two, the researchers recruited 109 graduate students in a Master of Management program at an Indian university. The participants in this part of the experiment had an average of 2.4 years of work experience. This sample was 12% female and 88% male, with a mean age of 24.2 years old. The students enrolled in an 8-week course on self-management. As part of that course, they were assigned to either a control group (no yoga) or a yoga treatment group within the class. All other aspects of the class assignments were the same between the two groups.

During the 8-week class, students in the yoga treatment group did a yoga practice twice per week for 25 minutes each session. It consisted of body tapping (3 minutes), asana (3 minutes), pranayama (12-14 minutes), and meditation (5-6minutes). Students in the yoga treatment and the control groups completed the same scales used to assess the three psychological states and their relationship to altruism, that the researchers used in part one. The students completed the scales before the course, at the end of the course, and four months after they completed the course.

As practitioners, we may have many different goals for our practice. And likely those goals will vary from day to day and change over the years of our practice. We may be mostly focused on physical health and wellness benefits of yoga at this point in our practice life. In that case, altruism may not be an object of our focus.

But, if we are looking to work with some of the mental, emotional, and personal growth aspects of yoga, then I think this study points out that what and how we practice matters. The yoga treatment in this study was very light on asana. Only three minutes in each yoga session were devoted to asana. The majority of each yoga session was devoted to pranayama (12-14 minutes) and meditation (5-6 minutes). These particular practices may work to balance the nervous system. And, they can take us out of the “doing” or “achieving” mindset which can creep in during a more asana-focused practice. The authors of this research don’t try to hypothesize the mechanisms of the particular yoga practices they selected for their treatment. But it is worth noting the effects of the particular yoga practices they chose.

If increasing altruism is something you are interested in, then yoga practice may support those efforts. Based on this study, however, it seems important to consider which yoga practices you’re doing and whether they are a good match for your intended goals.