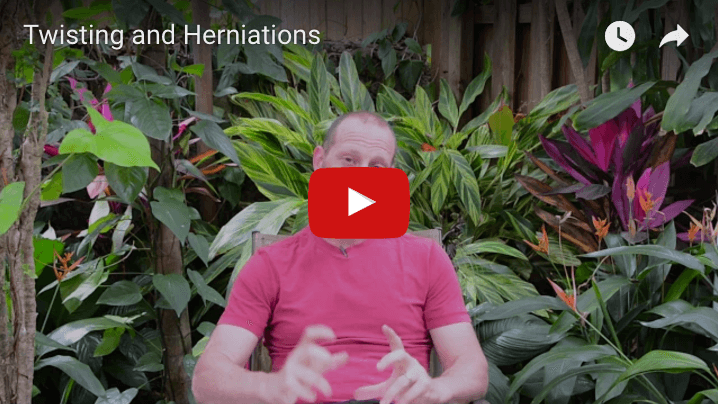 Yoga Twisting and Disk Herniations: Should You Do Twists in Yoga With a Herniation?

Transcript Of: Yoga Twisting and Disk Herniations: Should You Do Twists in Yoga With a Herniation?

Hey everybody!
I’m going to do another question of the month. This month’s topic is yoga twisting and disk herniations. Before I start, make sure you go onto Yoganatomy.com and sign up for the newsletter. You’ll get articles every month in your inbox and you’ll also hear about some of the great new online workshops and courses I’ve created.

The question comes from Wendy. It’s on yoga twisting and disk herniations. “There is so much controversy over should you do a twist pose if you have a herniation. I’ve been under the impression that it depends on where it herniated, forward, back, right, or left, but that the rule of thumb is no, unless it is an old herniation that’s not causing pain. Also, if it is one of those ‘depends on the degree of the twist’, is the laying on your back with your knees to one side safe? Can you clarify?”

Very good question Wendy. I get lots of questions about back pain and herniations. I think you’re always going to find controversy with topics like this because there isn’t really a single answer to your question. What’s important is how you think about it, how you assess students, how you test things with students, and how you modify things with students based on their individual needs. Now, you put the word safe in there. The safest thing is to not move at all and even that has detriment to us, so that’s not a realistic choice.

Typically, herniations are going back and off to one side or the other. They can go forward. They can go straight to the right or straight to the left, but typically they are sort of off at an angle. There is an area there where there is no additional ligamentous structure to help support the disk, so it’s sort of a weakened area, you could say, or an area of less resistance. Perhaps that’s a better way to say it. Herniations tend to go that way.

Now, over the last 20 years of teaching, I’ve met people with disk herniations who are fine with twisting, okay with backbending, but forward bends are the killer. I would say that’s probably the most common, that forward bends are usually the movement or posture type that is the most problematic for people with disk herniations, but that’s a generality.

I have met people for whom yoga twisting and disk herniations is a problem. Here’s the benefit. Typically what’s going to happen is that the student is going to know what kind of movements feel right and don’t feel right relative to their back problem, their herniation in this case. Use them as a guide. I’m not saying that to put the responsibility onto them, but it’s much better to go based on their feedback and what happens.

To be very specific with the other part of your question, does it depend on the degree of the twist, there are two things. You’ve got the degree of twist covered here, but you’ve also got to consider the degree of herniation. Some herniations are very mild. The other thing that you mention here is, if it’s not causing pain. Typically if somebody has a disk herniation and they’re in an acute phase of it, they’re probably not going to show up to a yoga class. It’s one of the last things they will probably do. It’s possible, but you’re probably meeting people somewhere after the acute phase is ended and they’re sort of cooling off and they’re heading into that I-need-to-be-careful-with-my-back phase of things. At that point, it’s typically not causing pain, but it feels like it needs to be protected and cared for in a very particular way.

It feels like laying on your back with your knees off to one side is sort of one of the more extreme versions of twisting. There’s a lot of gravity involved in it. It could move very quickly. Whether or not it’s safe should go on a case by case basis. I don’t think it is inherently bad or wrong, but remember you could always put a bolster alongside somebody when they go to do it. You could have them do that and test, you know, have them go just so far that their knees hit the bolster and they stop at some depth of twist that feels reasonable. You’re checking in with them and it doesn’t feel funny or odd or like it’s going to cause a problem. You just keep it there and then you see how their body responds in the next 24 or 48 hours. If that was fine, you move the bolster further away so that it bumps in further up their thigh towards their knee and see how it goes.

There are certainly good reasons to do twisting if part of the problem is as a result of tight muscles that are compressing, in a sense, the bones together and adding to the compression forces that are put onto the disk itself. Twisting can benefit tissues by stretching them and bringing fluid in there and all of the good things that happen from moving. The twist might be quite a benefit to those tissues and secondarily then to the amount of pressure that’s on the disk. The question is whether the disk is already compromised as a result of the herniation. You’re not necessarily going to fix that herniation or that weakened area. What you’re just trying to do is keep that area as healthy as you can and the tissues that we impact the most, of course, are the muscular tissues. From that perspective, twisting, moving is a good thing. Again, take it on a case by case basis with yoga twisting and disk herniations.

Alright Wendy, I hope that helped.