All you have to do is forward fold!

In part 2 of this series we looked at the relatively simple task of raising your arms over your head. Now we’re going to look at how simple it is to forward fold after raising those arms. All forward bends are connected as I wrote about in the Anatomical Patterns in Forward Bends chapter in my book, Functional Anatomy of Yoga.

Of course, like everything, as we look more closely, we see the complexity of how things interrelate and function…especially when we’re talking about the human body.

Where do we forward fold from?

Well, let’s start with the simplest answer to that question. We fold forward at the hip joint of course. (The spine also flexes, but predominantly the movement is at the hip.) What action is happening at the hip joint? It’s flexion of the hip joint.

What muscles work when we flex the hip joint to fold forward in a sun salutation?

I’m going to pause here for a moment and just waste a little time while you’re reading these words to see if an answer has popped into your mind. Did one? The most common answer to that last question is that it’s our quadriceps or other hip flexors that bring us into hip flexion.

It seems like reasonable and sound logic, as we are flexing the hips. The hip flexors must be the ones that are contracting to take us down into that forward fold. But in this instance, that logic is flawed. One of the most common elements people forget to include in their basic understanding of movement and function is gravity.

The spinal muscles are involved as well. They are part of that back line of tissue and contract to help stabilize the spine as our torso is lowered toward our thighs. Both the hamstrings and the spinal muscles have a tendency to be “tight”. The question I ask is: Are we taking advantage of that tension in a strength way, or are we exacerbating tension and either making the areas tighter, or making our way into dysfunction?

As we’re about to see, there are options when folding forward. You will have to decide which is most appropriate for you in this moment.

Bending your knees vs. keeping them straight

At this point I would say there are two basic options. Neither is absolutely right or wrong, they just create different effects. Feel free to do whichever is more appropriate for your body.
The first option is to keep the legs straight and it’s probably the more common choice. With the knees straight the hamstrings have to work, mostly by themselves, to prevent the forward fold from giving into gravity completely.

A secondary effect of folding forward with straight legs is that the hips have a tendency to move back behind the ankle while folding forward. This by itself is not harmful or detrimental. It’s probably a good compensation that relieves some of the potential stress on the hamstrings. This is especially true depending on what you’ve done with your arms while they are making their way down to the floor. (If your arms are above your head, there is more weight for your hamstrings to manage. The closer they are to your body, the less weight there is for them to manage.) 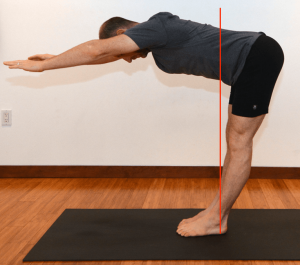 The above image is with knees straight. The line gives a reference relative to the ankle and how far back the pelvis moves during the fold. 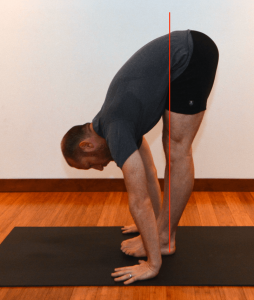 Notice where the hips are relative to the ankle using the red line.

The second option is to bend your knees. What does bending your knees do and how much bend are we talking about?

The answer is, it really doesn’t have to be much of a bend. But let’s be clear, we are specifically talking about bending the knees while moving. I want to stress that, because I am a firm believer that too much bending of the knees, along with some other patterns, can lead to a pain in your butt, literally. However, having your legs straight can lead to pain as well. Sit bone pain is still one of the top search terms that brings people to yoganatomy.com. I am a believer in straightening the knees (if possible) while IN a forward fold. I am in favor of a slight bend while MOVING into a forward fold (while standing). 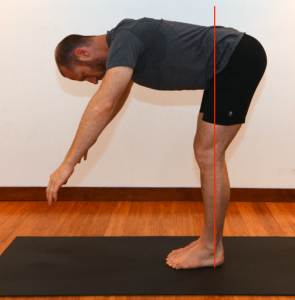 With the knees bent the pelvis does not have the need to move so far back and weight is distributed into the legs. 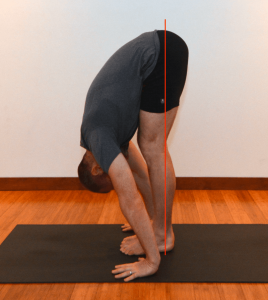 In the forward fold, the hips can line up with the ankle and weight pours into the hands.

Having said that, during movement itself the effect of bending the knees slightly is that you:

The chain of joints in a forward fold

Keep in mind that your leg is a functional chain. By that I mean that all of the major joints, ankle, knee, and hip, are interrelated. If we bend the knee in this case, both the ankle and the hip joint itself will have to change. By change, I mean, they move and therefore recruit muscles around those joints to help stabilize through this movement (There is more detail on this in my book).

By recruiting these other muscles the amount of weight that the hamstrings have to support is significantly reduced. The hip is more likely to be able to stay in alignment over the ankle when there is a slight bend of the knees during the folding movement. This is because the hips aren’t compensating for the weight out front by moving backward over the line of the ankle. This then leads to the weight being distributed through more muscles in the leg. Instead of relying on, and “tightening” those hamstrings, other muscles can now help support and stabilize the movement, i.e. gluteals and quadriceps.

There is still further to go with the end of this movement. When we put our hands on the floor and fold followed by the looking up movement, we are going to see that our hamstrings and back muscles are in the game again. Where should we put our hands anyway? Should they be flat or should we be on fingertips? Let’s look at this piece of the sun salutation next month and prepare for the very important jumpback that we are about to see.